Don't worry - I'm not the one with a broken heart. I chose the title because I liked the alliteration and because these would be the perfect brownies to heal any love-life woes. This is another one of my almost homemade recipes, like my Butter Pecan Cupcakes. It takes a brownie mix and adds in some magic to make a delicious concoction that looks and tastes like it could be homemade. This recipe is also ideal for the broken-hearted because it's quick and easy. When your heart is hurting, you don't have the time or the energy to bake brownies up from scratch. These come together in no time using just one bowl and then throwing the mix in the oven. For very little work, you're rewarded with a delectable heart-healing treat.

Preheat the oven to 350F. Grease the bottom of an 8 inch square pan. Add in the ingredients specified on the brownie mix package, but don't mix in right away. Add in the additional ingredients (vanilla, cinnamon, coconut, nuts, and chips) and then mix thoroughly until the batter comes together. Spread the batter into the prepared pan and bake for 35 minutes.

All it takes is some stirring and spreading and voilà: 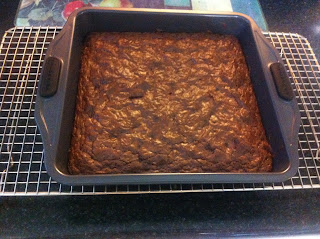 Moist, chewy brownies with lots of little suprises inside! The coconut flakes give the brownies a more chewy texture, and the cinnamon adds an exotic flavour that plays up the chocolate. 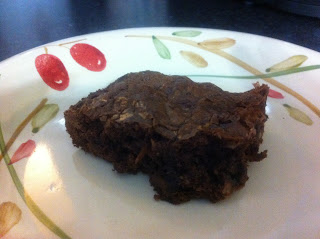 I ate my brownie plain, but for those truly in need of some heart mending, you could add a scoop of ice cream, some chocolate or caramel sauce, whipped cream, the list goes on. Bottom line is these brownies will have you back in your happy place in no time.

My beats match the broken heart theme. I was introduced to this band by my friend Courtney from university when we went on a road trip for March Break last year. She provided the tunes for the drive and put in an album by The Airborne Toxic Event. I fell in love with every track and still listen to them now. The song I chose is one of the best break-up songs I have ever heard. It's about running into an ex who you still have feelings for, and it captures the true raw emotion of that moment. Here is Sometime Around Midnight by the Airborne Toxic Event.