Being a teacher, I am very aware that not everyone is at the same level with every skill. The key to my effectiveness in the classroom is creating and providing options to meet the needs of each of my students that still allow them to work towards success of the skill or concept. In the education world we call it Differentiated Instruction, Tiered Interventions, or Scaffolding.

Likewise, with baking, I realize that not all my readers will be as comfortable as me in the kitchen. Many of you may find the idea of baking a cake from scratch daunting and intimidating, and prefer to stick to the out of a box version. So I'm using this post as a scaffolding tool to move those of you who are hesitant closer to baking mastery. This recipe shows you a way that you can stay within your comfort zone (using a box cake mix and a tub of store-bought icing), but still add your own special touch to make your dessert seem homemade. It only takes a few small additions to turn a boring cake mix into: Butter Pecan Cupcakes with Cinnamon Cream Cheese Frosting.

Prepare the cake mix according to package directions. Stir in the vanilla, cinnamon, and nutmeg until well combined. Spoon cake batter evenly into greased cupcake tins. Bake according to package directions. Remove from oven and let cool in pans for 5-10 minutes, and then transfer to wire racks to cool completely.
While the cupcakes are cooling, put all ingredients for the frosting in a mixer bowl and beat on medium speed for 1-2 minutes, scraping down the sides of the bowl. Add more cream cheese or more honey to taste if desired (more cream cheese for a tangier frosting, more honey for a sweeter frosting).
Once the cupcakes have fully cooled, ice using a spreading knife or piping bag. 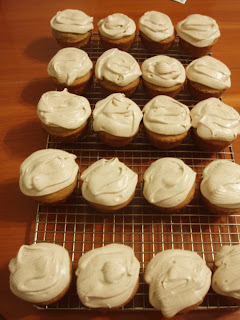 And the result is delicious! The cake is moist, buttery, and a tad spicy with the addition of the cinnamon and nutmeg to the batter. The icing has a wonderful tang with the cream cheese, and the cinnamon is visible in the white of the icing giving it that homemade look. Preparing cupcakes or a cake in this way is a great first step towards fully home-baked goods. Just add in the flavours you personally enjoy to enhance the cake mix and icing. Good starting ingredients are vanilla extract, cinnamon and nutmeg, honey, or any other extract or liqueur, such as adding Grand Marnier to a basic vanilla cake mix, and then grating some orange rind into the icing to tie it together. You have the freedom to be creative here because of the "safety" factor of using a cake mix - it's pretty much impossible to screw up a cake from a box.

These were fun and easy to make and took very little time to throw together, owing to the convenience of using store bought cake mix and frosting as a base for my recipe. My beat is also a quick song but one that is a pleasure to listen to, and at the end, the listener is satisfied with the experience, but still hungry for more. I was sampling the icing as I frosted the cupcakes and I already ate one from the batch, but my taste buds are telling me to have just one more...Here's Dog Days Are Over by Florence and the Machine.